PowerXL is an eight-purpose device that can bake, air fry, grill, reheat, toast, and roast. It also has a rotisserie and pizza function. It is made of stainless steel and has eight different cooking functions.

The fact that it may be used as an indoor grill is a distinguishing characteristic of this equipment. Say goodbye to cooking only outside, the PowerXL air fryer and grill is the ideal option for when the weather is less than ideal.

It also comes with a grill pan, which ensures that it will fit properly into the machine and that you will get an excellent sear. There is a total of 930 cubic inches of interior space in this device. Which has 1,500 watts of electricity and weighs little more than 24 pounds. It has the capacity to accommodate a 10-pound bird and cook up to six big burgers at a time, according to the manufacturer.

Its rapid-air technology and XL fan circulate heat. It allows you to cook meals in a more health-conscious manner and achieve crispiness without using as much fat as you would otherwise. 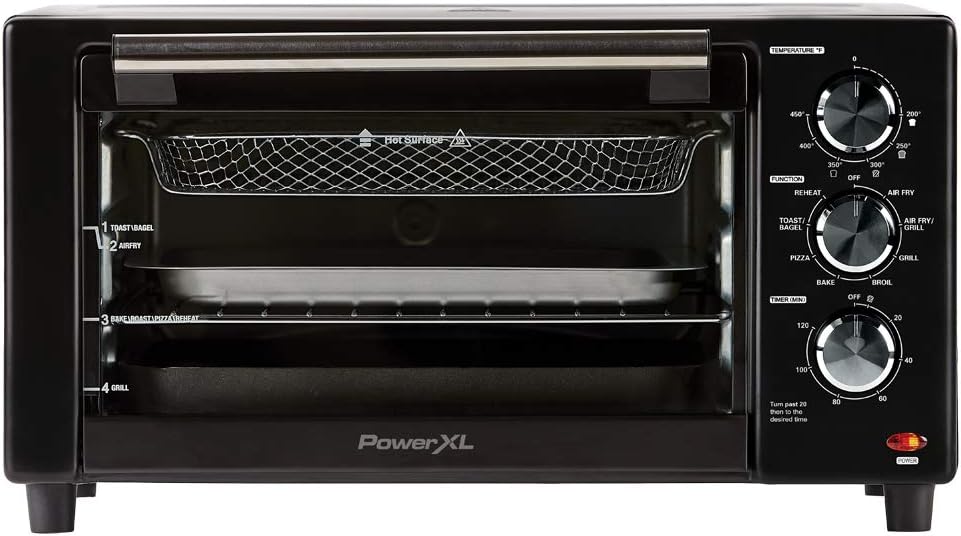 It comes with a variety of accessories including; an oven rack, baking pan, air-frying rack, grill plate, drip tray, rotisserie spit set, egg and muffin tray, and a griddle plate. So you won’t have to spend any more money to take use of all of the features of this appliance.

Despite the fact that this is an excellent machine. There are a number of things to keep in mind before buying the PowerXL. Some customers have complained that the fan noise is too loud. So if you are sensitive to noisy appliances or want a machine that whispers quiet. This should be taken into consideration.

The Emeril Lagasse 360 Toaster Oven is the second device that will be reviewed. There are 12 cooking modes on this stainless-steel device. Including the following: air fry, bake, rotisserie, dehydrate, toast, reheat, roast, broil, bagel, pizza, slow cook, and warm/reheat.

It is more sophisticated than your typical toaster oven. It utilizes 360-degree quick-cook technology to cook your food uniformly. And to achieve a high temperature for air frying, which is more difficult with a conventional toaster oven

This appliance has a power output of 1,500 watts and has the ability to achieve temperatures of up to 450 degrees.

The slow cook and dehydrate functions, as well as the ability to cook for up to 72 hours. This allows it to outperform conventional toaster ovens, which typically cook for no more than 60 minutes. 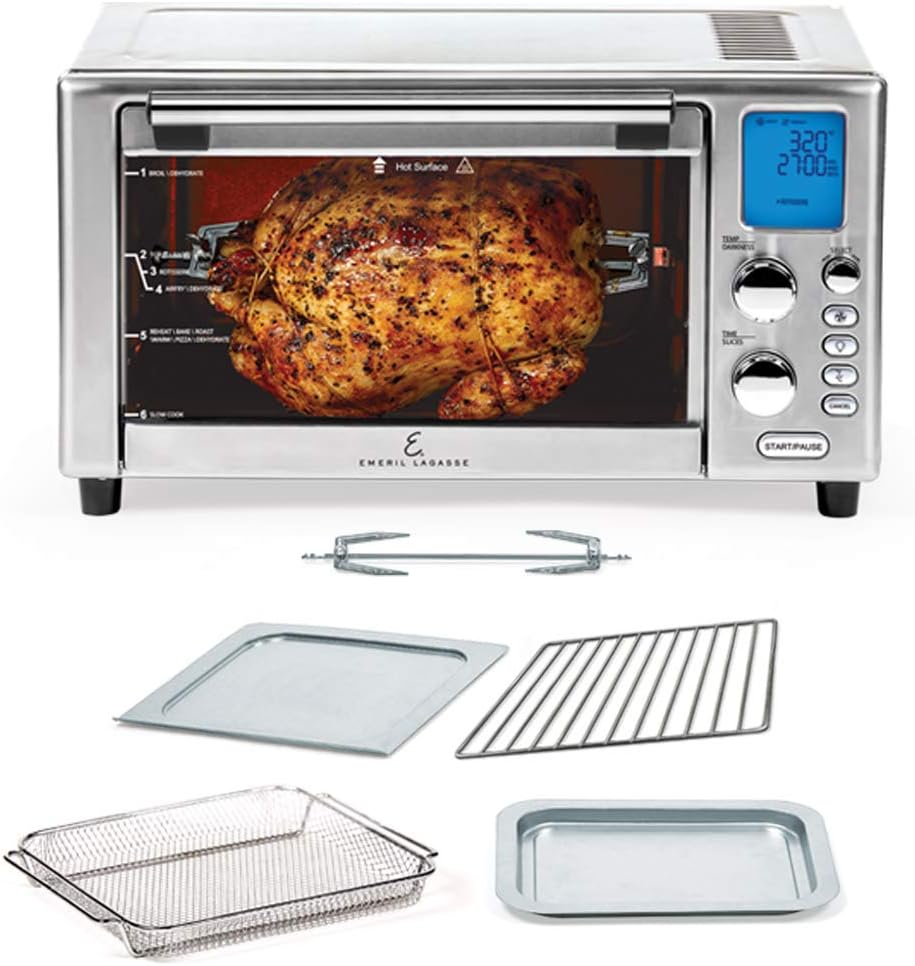 A high-tech, contemporary appearance is provided by the Emeril 360 LCD digital display, which shows you all 12 cooking presets as well as a temperature dial that enables you to adjust pre-set cooking temperatures and choose a toasting shade.

The 360 Toaster Oven weighs 20.5 pounds and has a capacity of 930 cubic inches. It can toast up to six pieces of bread at a time. And it can accommodate a 10 to 12-pound chicken, depending on the size of the bird.

This item’s exterior measurements are 15.1′′ D x 19.3′′ W x 10.4′′ H. It also features a non-stick coating on the inside. A rotisserie spit set, an oven rack, a baking pan, an air frying rack, a drip tray, and a rotisserie frying rack are all included with this device.

We’ve discussed the features and benefits of each appliance, but what are the primary distinctions between them?

Both toaster ovens will undoubtedly free up counter space and save you money; by eliminating the need to purchase numerous machines for various cooking methods. however, whatever features are most essential to you will determine which toaster oven you choose.

This implies that the Emeril 360 Toaster Oven includes additional functions such as slow cooking, dehydrating, reheating, and broiling that the PowerXL does not have. If these are features that you anticipate using on a regular basis. You should seriously consider buying the Emeril 360.

A manual operation is required for the PowerXL. Which uses knobs to regulate cook time, oven temperature, and cooking function. In contrast, the Emeril 360 features a digital LCD display for cooking operations, as well as quick-touch buttons to operate the oven fan, “light”, and “cancel.”

For those seeking a more sophisticated gadget to help them improve their culinary skills, the Emeril 360 Toaster Oven is a fantastic option. The appliance comes with an Emeril-authored recipe book. Which will help you get the most out of the machine while also generating some great dish ideas.

When comparing the PowerXL to the Emeril 360, it is clear that this device is less complicated to use and works more like a traditional toaster oven. Complete with manual knobs and a maximum cook duration of 60 minutes. It does, however, include a grill option, which the Emeril 360 does not have, which is a plus.

It also includes a grill pan. So you won’t have to go out and get one separately. Aside from that, your purchase of the PowerXL includes eight different cooking trays and utensils. It allows you to utilize each function without the need to buy additional items. In contrast, the Emeril 360 comes with just five cooking pans or utensils, which is a bare minimum.

Comparing size, the PowerXL is somewhat heavier than the Emeril 360 by four pounds. But the difference isn’t very noticeable, and both have the same amount of internal cubic feet.

link to Homemade Doritos Recipe Crispy And Simple (Updated 2021)
Homemade Doritos Recipe tastes exactly like the others, except it’s prepared with genuine ingredients. They’re great as a party appetizer or packed in a school lunch with cheese dip. They’ll be the first snack to go, no matter how you offer them! We see these chips at almost every gathering, and they go off the […]
Continue Reading
link to What Is Raw Food Diet? (With Benefits And Basics)
Eating raw foods is natural. Our bodies thrive on all that is fresh and vital. A raw food diet (or increasing the amount of raw food that you eat) is bound to bring a feeling of increased wellbeing.  Raw food diets are based on unprocessed and uncooked plant foods, preferably organic, such as a variety […]
Continue Reading